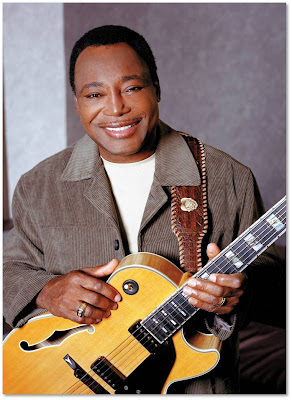 At various points along the four-decade continuum of George Benson’s career, he has been heralded as a jazz guitarist of unparalleled chops, a vocalist with great emotional range and sophistication or a combination of both. However, he regards himself as an entertainer in the broadest sense of the word – a singer of songs, a spinner of tales. That’s the essence, Songs and Stories.

“It’s a very simple equation,” the National Endowment of the Arts Jazz Master says of the longevity of his career and the ten Grammy Awards that have punctuated it along the way. “In the end, it’s about the songs and the stories. That’s what keeps the music fresh for me. That’s what keeps me coming back. If you come up with a great melody and put the right lyrics to it, I’m immediately excited.”

That excitement is evident in his new release, Songs and Stories, due August 25, 2009, on Concord Records / Monster Music. The album is a collection of tunes penned by some of the most prolific and enduring songwriters of the last half-century, including James Taylor, Smokey Robinson, Lamont Dozier, Bill Withers, Donny Hathaway and several others. Some were written specifically for this new recording, while others were hand-picked by Benson for their ability to convey simple but universal truths about the human experience.

Songs and Stories was produced by Concord exec VP of A&R John Burk and renowned bassist / composer Marcus Miller.  Benson, Miller, keyboardist Greg Phillinganes, guitarist Jubu and drummer John Robinson make up the core unit for the project.  They were joined by special guests: guitarists Lee Ritenour, Steve Lukather, Wah Wah Watson and Norman Brown, vocalists Lalah Hathaway and Patti Austin, keyboardist David Paich, saxophonists Tom Scott and Gerald Albright along with several others.  “Brother, with that team, you can do just about anything,” said Benson. “We recorded in the studio for three days straight, and everything we touched had something on it that made us all glad we were there. It was just the right mix of people and material. Once we realized that, the challenges disappeared. It just became an exercise in great joy. We were happy to jump on it, we knew we were going to get something special, and that’s what we got.” The combined talents of these writers and musicians make for a series of unforgettable tales, and Benson himself is the narrator who weaves it all together.

And yet, for all of the high-caliber musicians on hand, the most important guests are the songwriters, says Miller. “Smokey Robinson doesn’t perform on this record, but he’s still a guest,” he says. “Lamont Dozier is a guest. Bill Withers and James Taylor are guests. If you take great songs from writers like these, and you put them in the hands of George Benson and a great band, you’d better just get out of the way and let things happen, because the result is going to be something great.”

For Benson, a great song has the capacity to actually alter reality – not just for the listener but for the performer as well. “When I play a song like Christopher Cross’ ‘Sailing,’ which you hear at the very end of Songs and Stories, it actually puts me out on the ocean,” he says. “And I’d like to think the song can do the same for the people who hear it. That’s why people like Frank Sinatra or Nat King Cole were so successful. When they started singing, they would actually take you to another place. And for a few moments, at least, you could actually feel the atmosphere of that place and that story all around you. Nobody did it better than those guys, but that’s a little of what I try to do – not just on this record but on all of my records. I try to take the listener to another place.”

While he may hold the likes of Sinatra and Nat Cole in a category all their own, Benson himself is at the center of a unique musical story that stretches all the way back to his early childhood. At age eight, he was already singing and playing the ukulele in local nightclubs in his native Pittsburgh. By his teenage years, he had switched from ukulele to guitar, and he had stopped singing for the most part to focus more on his instrumental work. His musical sensibilities shifted toward jazz, due to his exposure to records by Wes Montgomery, Charlie Christian and Charlie Parker.

By the early ’60s, Benson had joined organist Jack McDuff’s band – a gig that was educational but short-lived. He left to form his own band and launch his solo career with the 1964 album, The New Boss Guitar (a nod to Montgomery’s album, Boss Guitar, released just a year earlier). The album caught the attention of legendary Columbia Records talent scout John Hammond, who signed him to the label. Benson recorded two solo albums for Columbia and played session dates for numerous other artists, including Miles Davis’ 1968 opus, Miles in the Sky.

He left Columbia in the late ’60s and recorded on a number of labels for the next several years. All the while, he’d been looking for a way to redevelop his vocals and make them part of his overall repertoire, but most of the producers and record execs at the time dismissed the idea, which became a source of growing frustration. But producer Tommy LiPuma saw the idea differently, and the result was Breezin’, the 1976 blockbuster album that marked the beginning of a long association with Warner Brothers. The first jazz record to achieve platinum sales, Breezin’ yielded a number of hits, including the instrumental title track, the soulful update of Leon Russell’s “This Masquerade” and the lively “Give Me The Night.”

Throughout the remainder of the ’70s and into the ’80s, Benson and LiPuma crafted a string of great records that collectively cemented the guitarist’s global reputation. In the mid-’90s, Benson followed LiPuma to the GRP label, where the two basically picked up where they’d left off at Warners. High points from the period include That’s Right (1996) and Standing Together (1998).

Since the start of the millennium, Benson has shown no signs of slowing down. Some of his more notable offerings of the past decade include Absolute Benson (2000), the sexy and soulful Irreplaceable (2004), and Givin’ It Up (2006), a duet recording with Al Jarreau that scored two Grammy Awards and marked his Concord Records / Monster Music debut.

Songs and Stories, the followup to Givin’ It Up, is an equally satisfying affair. The set opens with a Latin-flavored cover of James Taylor’s “Don’t Let Me Be Lonely Tonight,” one of two tracks on the album recorded in Sao Paulo, Brazil, with a team of Brazilian session players. “James Taylor is a great songwriter, and a great performer too,” says Benson. “Not many people are brave enough to cover his songs because he does them so well himself, and with such simplicity. It’s hard to beat that combination, but I tried my hand at it while I was down there, and it came off so well that I decided to put it on the record.”

The first songwriter Benson contacted when he began assembling material for this project was Rod Temperton, author of his biggest hit “Give Me The Night”.  Temperton, whose credits include much of Michael Jackson’s seminal album “Thriller” among many other classics, contributed the spectacular tune “Family Reunion”. Further into the sequence, Benson is joined by vocalist Lalah Hathaway on “A Telephone Call Away,” a heartfelt duet written by Bill Withers, who came out of retirement to write it specifically for this album. “Every song Bill Withers touches seems to appeal to a huge audience,” says Benson. “He understands the inner workings of people’s hearts and minds, and it comes through in his songwriting.”

“Nuthin’ But a Party,” a guitar duet with Norman Brown, is everything the title suggests. The song was written by a crew of funk purveyors from the ’80s that includes brothers Roger and Larry Troutman (of Zapp fame) along with Marlon McClain and Robert Harris (of the Dazz Band). “This song is more about the dueling guitars than anything else,” says Benson, although Brown does sing a few supporting lines throughout the track. “I was surprised at how well Norman handled his vocal parts in the song. His guitar playing is superb, which didn’t surprise me at all, because he’s a fabulous musician. But he also has good vocal range, which did surprise me.”

“One Like You,” written by Smokey Robinson, lays it on the line with a no-holds-barred declaration of love that features guest guitar work by Lee Ritenour. “I’ve known Smokey since we were teenagers,” says Benson. “Just look at his body of work. He writes nothing but magnificent songs – simple but universal ideas that everyone can relate to, colorful stuff with great harmonies. This song is consistent with that track record.”

Songs and Stories closes with the aforementioned cover of “Sailing,” the 1980 pop smash by Christopher Cross. On this second track from the Brazil sessions, Benson conjures rich layers of atmosphere with the help of acoustic guitarists Toninho Horta and Marcelo Lima, along with Noel Lee on wind chimes. “To be honest, I had no particular feeling for the song when I first heard it years ago,” Benson admits, “but when I actually played it; I began to understand the thinking that went into it. I understood why people liked it so much. It carries more weight than I originally realized, and it conveys an idea that’s very simple but heartfelt.”

More than forty years after Benson cut his first recordings, could the songs ever become repetitive? Could the stories get old? “If they did, I would be the first to know,” he says, “because I get bored quickly. If that ever happens, I’ll find something else to do. But it has yet to happen, and it never will. Music is too incredible of an experience for me. There’s always someone new coming along with a fresh idea that turns the music inside out and changes the way we listen and think. There’s always someone out there – someone we’ve never even heard of yet – with a new song and a new story.”

Concord Records is proud to once again partner with Monster Music® on presenting the newest George Benson album Songs and Stories on High Definition Surround™ Sound SuperDisc™.  The Monster® version, also available August 25th, is a specially priced two-disc package that consists of Songs and Stories on compact disc mixed in traditional stereo and a bonus DVD, containing Monster’s High Definition Stereo and Surround mixes. In addition, the bonus DVD features behind-the-scenes video footage of the making of the record including an in-depth interview with George Benson. With its innovative High Definition Surround technology Monster Music is revolutionizing the listening experience. Mastered in the highest resolution possible, HDS SuperDiscs are specially engineered to capture the true harmonic depth and tonal richness of the music. THX certified HDS SuperDiscs deliver the music through a 5.1 speaker system just the way the artist heard it in the studio when it was recorded, the way they intended you to hear it.