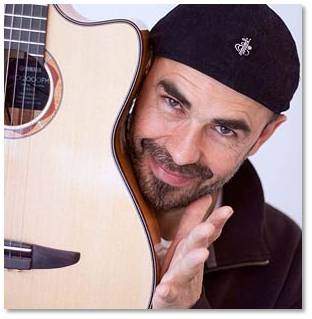 Hailed as the 'Jimi Hendrix of the acoustic guitar', award-winning Forcione is considered one of the most charismatic and inventive performers to come out of Europe in recent years. He breaks the mould of most conventional, popular guitar sounds be it in the field of jazz, Spanish, African, Brazilian or improvised music. International tours have brought high critical acclaim from as far as Australia and Hong Kong to Russia, the Caribbean, USA and all over Europe.

His 16 albums have variously hit the top of UK and international jazz charts and he has shared the stage worldwide with some of the world’s most accomplished musicians (see below), double-billing with artists such as John McLaughlin, John Schoffield and Antonio at Chiswick Bridge

Born in Italy in a small village along the Adriatic coast, Antonio first drew public attention at 13 when he toured with his own band throughout Italy as a guitarist, mandolinist and drummer. He got a diploma in art and sculpture from the Art Institute in Ancona, and studied music in Rome (as well as mime) before moving to London in 1983 in search of greater inspiration.

“A performer of world class status ... forceful and with an enviable technique, he takes the guitar to new levels of expression combining its melodic powers with dramatic percussive effects. Forcione boldly goes where no guitarist has gone before and the results are quite spectacular ... miss him at your peril”.

Unable to speak English, he initially resorted to busking in the streets of London’s Covent Garden, and within 2 months he had won an award which led to a BBC television appearance before being whisked off to open for the pop group Barclay James Harvest on a major European tour for over a total of 300,000, people culminating in a concert at Wembley Arena. He never looked back.

He has performed in festivals and theatres from as far as Australia and Indonesia to the USA, Canada, Caribbean, Turkey, Lebanon and all over Europe, especially in France, Germany, Switzerland, Austria and the UK. His festival appearances include Womad, Glastonbury, Edinburgh, Melbourne, Koln, Verona, Granada, Hong Kong Arts Festival, Singapore Arts Festival and the Machoire d’Or in Montreux amongst others, as well as most major International Guitar festivals.

Antonio’s constantly innovative approach to life have also led him to explore the realm of music comedy performance resulting in invitations to perform at comedy festivals throughout the world. He has performed with other comedians such as Boothby Graffoe, Django Edwards, Stephen Frost, Tanderika and Ursus & Nadeschkin, acted as musical director and performer for the award winning trio Ole, and formed the duo ‘Acoustik Maniaks’ with guitarist Neil Stacey, as well as appearing in variety shows as a Solo comedy artist.

In 2001 he won the ‘Best Spirit of the Fringe Award’ at the Edinburgh Festival with a resulting tour of Australia, doing both straight music and music-comedy. "After 100 years of guitar playing is there anything left to do? Forcione proves that there is. Not content to be just a guitar genius, he injects his playing with physical comedy of unparalleled ferocity. This renowned musical performer has changed the way we look at the humble acoustic guitar".

Artistic, intense, and formidably inventive, Antonio is a performer of genuine distinction. Ever unpredictable, his is a celebration of the unexpected elements in life, a music of rare delicacy, humour and, not least, passion.