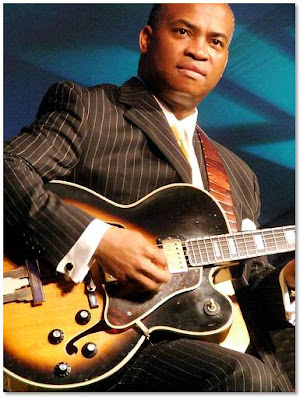 Ever since Charlie "Bird" Parker recorded his (first) Charlie Parker With Strings sessions in 1949 and 1950, jazz artists have celebrated their romantic sides by employing lush string sections. Everyone from Chet Baker to Clifford Brown to Wes Montgomery did some of their best work in the presence of string sections, and on Heartstrings (Verve), Russell Malone puts his own spin on the jazz-with-strings tradition. Those who think that they’ve heard it all when it comes to strings projects are in for a surprise; Heartstrings, the swinging yet lyrical guitarist’s sixth album, is full of gems that jazzmen often overlook.

Typically, a jazz-with-strings project will emphasize what has often been called "The Great American Songbook"—namely, well-known standards of the 1920s, 1930s, and 1940s. But on Heartstrings, which was produced by the GRAMMY®-winning Verve Music Group Chairman Tommy LiPuma, Malone doesn’t limit himself to the George Gershwin and Cole Porter standards that jazz artists have recorded time and time again. Employing a solid rhythm section (pianist Kenny Barron, bassist Christian McBride, and drummer Jeff "Tain" Watts) and three different string arrangers (pianist Alan Broadbent, Brazilian great Dori Caymmi, and the famous Mandel), Malone lends his unmistakable sound to everything from an Anne Murray hit ("You Needed Me") to a gospel favorite ("What A Friend We Have in Jesus") to the Sammy Cahn/Jule Styne gem "Guess I’ll Hang My Tears Out to Dry."

"I’ve always felt that jazz is the way in which something is done," the 37-year-old Malone asserts. "The material can come from anywhere—what makes it jazz is the way you approach it. I was recently listening to Sonny Rollins playing ‘Tennessee Waltz,’ which isn’t a song you associate with jazz. But man, Sonny plays his heart out on that song. Sonny is interested in the quality of a song rather than where it comes from, and that is how I approached this record. I like a lot of different kinds of songs."

Indeed, Heartstrings finds Malone interpreting a variety of material. "Wind in the Willow" is a ballad that has been recorded by cabaret singer Michael Feinstein, while "Handful of Stars" is a Jack Lawrence/Ted Shapiro classic that was recorded by Nat "King" Cole and Stan Getz, among others.

"I pick songs based on the strength of the melody, and all of the songs I chose for this album have strong melodies," Malone comments. "I take pride in knowing a lot of songs. I’m happy to say that I’m never at a loss for material."

Although Malone is very much a jazz artist and Heartstrings is very much a jazz album, he will be the first to tell you that he is far from a jazz snob. Quite the contrary—Malone appreciates everything from R&B, gospel, rock, and blues to cabaret and country. If you looked through Malone’s CD collection, you would find plenty of jazz. But you would also find artists who range from Mahalia Jackson to Michael Feinstein to Johnny Cash to Frank Sinatra.

"As much as I love jazz music, I would never say that it is any more valid than rock, R&B, blues, gospel, or country," Malone says. "I would never say that because I love all kinds of music. I can have just as much fun playing a Willie Nelson song as I would have playing something by Duke Ellington. A lot of jazz people can be very condescending toward people who play other kinds of music, but I would never do that. I would never look down my nose at a rock, R&B, or country musician because I know they’re just as serious about what they’re doing as I am about what I’m doing."

Born in Albany, Georgia, Russell Malone grew up playing a variety of music. Eventually, he made jazz his main focus, but he never lost his appreciation of other styles. Malone, who now lives in New Jersey, was 25 when, in 1988, he was hired as a sideman by the seminal organist Jimmy Smith. He went on to back Harry Connick, Jr. from 1990-1994 and spent four years working with Verve labelmate Diana Krall, in addition to guesting on numerous recordings.

Malone first recorded as a leader in 1992, when he provided his self-titled debut album for Columbia. Subsequently, Malone recorded Black Butterfly for Columbia in 1993, Wholly Cats for Japan’s Venus label in 1995, Sweet Georgia Peach for Impulse! in 1998, and Look Who’s Here for Verve in 1999. Having produced the latter two, Tommy LiPuma was obviously the man for the job when Malone was ready to record Heartstrings.

Malone was thrilled with the chemistry and professionalism that the musicians exhibited during the recording of Heartstrings. "The quartet went in the studio without doing any rehearsing. All of the guys in the quartet read the music and listened to a demo tape that Tommy and I had done, but there was no rehearsal. We did most of the tunes in one take! I’ve been in situations where you spend ten hours in the studio and barely get through three tunes, but I don’t like to work that way—and I was happy that this quartet was well prepared. Kenny Barron, Christian McBride, and I had been in various situations before, and Jeff Watts really blew me away. He’s such a marvelous musician; he knows the whole history of jazz drums."

"I’ve always wanted to do a record with strings, and when I first signed with Verve Records, that was one of the things I discussed with Tommy LiPuma," Malone remembers. "I wanted to experiment with some other musical situations. Having done that, I felt that I was free to record Heartstrings. I’m very proud of this record."