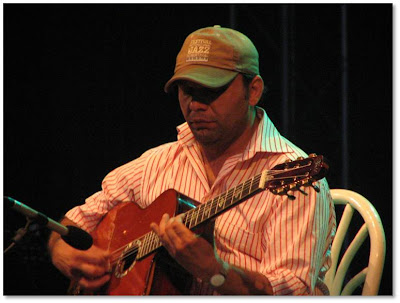 Biréli Lagrène was born on September 4, 1966, in Soufflenheim, Bas-Rhin Alsace, France, in a traditional Manouche-Romani people (Gypsy) family and community. He started playing the guitar at the age of four. He grew up in the loving but tough environment of the "tzigane". His father Fisso (a very gifted violinist), his mother Berga and his brother Gaiti were his biggest influences. When, at the age of eight, he covered Django Reinhardt’s repertoire, his relatives were already calling him a child prodigy. Winning a Romani music festival in Strasbourg at the age of twelve gave him the opportunity to tour in Germany and, later, to record his performance on the LP Routes To Django - live At The Krokodil.

Offered a chance to leave for the United States, Lagrène met some of the most distinguished jazz musicians on the international scene, such as Stéphane Grappelli, Benny Goodman, and Benny Carter. In 1984, he met Larry Coryell in New York. Later, he was introduced to bassist Jaco Pastorius and ventured with him into jazz fusion. Together, they toured Europe, which contributed a great deal to Lagrène’s musical emancipation. Lagrène has also performed live with guitarist Al Di Meola. Back to a more traditional style, Lagrène recorded Gipsy Project and Gipsy Project and Friends in 2002. Along with his usual cohorts Diego Imbert (double bass) and Hono Winterstein (rhythm guitar), the latter session featured Henri Salvador and Thomas Dutronc (son of legendary French pop pair Françoise Hardy and Jacques Dutronc).