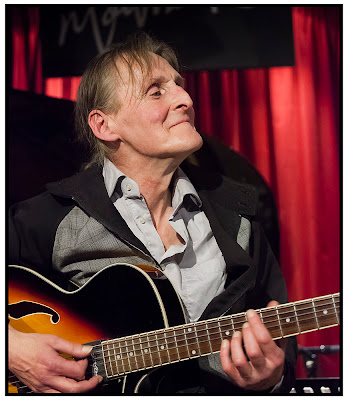 Doug Raney was born in New York City, 1956 and is the son of guitar legend Jimmy Raney. Doug started playing guitar at age 14 and his earliest explorations were in rock and blues. By age 17 he was almost exclusively into jazz, swapping his Gibson SG for an L7. His first gigs were with bebop piano great, Al Haig at age 18.

Doug went on a concert tour with Jimmy in Europe, eventually deciding to make it his home and finally settling in Denmark. Gigs with Johnny Griffin and Dexter Gordon followed. His debut record, Introducing Doug Raney for the Steeplechase label, recorded when he was just 21, was very well received. Other Steeplechase records followed including he legendary trio recordings from one night at the Montmartre with Chet Baker and Niels Henning Ørsted Peterson, producing 3 classic albums (Daybreak, This is Always and Someday My Prince Will Come). With his reputation solidified, several great records followed with Jimmy on Steeplechase (Stolen Moments, Duets, Nardis) and Criss-Cross labels (Raney ’81).

In total Doug has recorded close to 30 records and has truly established his voice as one of the best of the modern bop guitarists in the tradition — no small feat given his illustrious father’s achievements on the same instrument. Despite his recognition and following by critics, contemporaries and jazz fans alike, Doug (like his father) continues to fall under the radar of the jazz listening public.

After a long layoff Doug has been active in 2012 doing several gigs at the famous Montmartre Club in Copenhagen, Denmark and knocking people out.